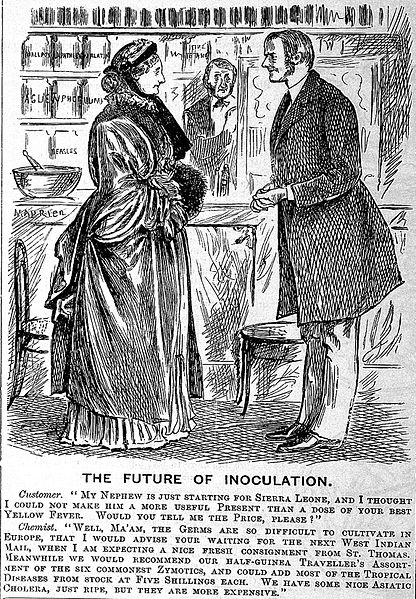 Caricature: The Future of Innoculation

I wouldn’t bother spending time writing about the yellow fever vaccine or immunisation generally because, being isopathic prescriptions, vaccines were proven not to work at least 200 years ago but I was horrified by the effect of the yellow fever vaccine on BBC man Michael Brabant. When I asked someone in medicine if it could be true they said, yes that there is a recently qualified nurse in hospital in Galway lying in a coma for a significant period due to vaccination; yellow fever and another one.

The young nurse was planning to do voluntary work in Uganda. The road to hell is paved with good intentions, the old saying goes, and it’s true for this poor girl. Back in the 1980s I met a Jesuit priest living near Slough, UK. He was now on in years but since a young man was in a wheelchair after a routine vaccine before going overseas to work. Was it the dreaded yellow fever jab?

… And Nothing, Not Even Immunity

I wouldn’t mind if the vaccine worked. Do you remember the German cameraman about 13 years ago who died in Africa? (click here) There was great excitement in the media because it was assumed he was the first to die from Ebola virus. It turned out he died from yellow fever and when his wife revealed he had had his yellow fever vaccine, the media suddenly went quiet.

Of concern also, is the fact that Irish people taking expensive tropical holidays are often “poor” enough to qualify for medical cards. The medical card entitles them to free vaccines (and maybe a free G.P. visit too) for their social welfare trip which the taxpayer has to fund. Great isn’t it..?

According to Michael Brabant’s wife’s blog Sanofi Pasteur now admit the vaccine can make you go mad. To read his experience click here

Read an account of his experience in the Daily Telegraph here

For more on vaccines go to Harris Coulter’s research.

Epilim (Sodium Valproate) Causing Birth Defects
May 2017 – Sanofi are in the news for the wrong reason again. Their drug Epilim causes birth defects. They knew this but said nothing. In 2014 the British changed the packaging so:

She “cannot believe” Epilim is still sold in Ireland without a warning on packets. In Britain, on the front of packets of Epilim is a warning in large type: “WARNING FOR WOMEN AND GIRLS: This medicine can seriously harm an unborn baby. Always use effective contraception during treatment. If you are thinking about becoming pregnant or you become pregnant, talk to your doctor straight away.”

“Ireland just seems so lax on this,” Irish Times

Epilepsy drug ‘responsible for up to 4,100 severe birth defects’ in France: “Sanofi, were too slow to warn of the drug’s side-effects although the risks to foetuses were known by the early 1980s.” Daily Telegraph

www.medicines.ie and Sanofi’s websites provide no information (so far as I can find).

Sanofi and its subsidiary in Ireland, Genzyme, based in Waterford are large employers. Sanofi did not reply to the Irish Times’s request for information – despite a section on its website about transparency…

British government report, “First Do No Harm: The report of the Independent Medicines and Medical Devices Safety Review”, was asked to explore, Primodos, sodium valproate and pelvic mesh”, https://www.immdsreview.org.uk/Report.html?

NEW BOOK: Medicine That Makes Sense: Selected Writings on Homeopathy at the Juncture of Medicine, Nutrition, Philosophy and Science, by Stephen Blendellclick here for more information