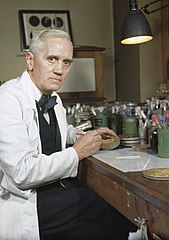 Scientists take much for granted regarding antibiotics. As previously mentioned – TCD scientist misunderstands antibiotics – many assume that bacteria alone cause disease but there is more to infection than the role of bacteria. Now (July 2017) a group of experts has published an analysis in the British Medical Journal undermining the usual advice that patients should always finish a course of antibiotics.

The comprehensive paper, entitled The antibiotic course has had its day, will shock and disturb many because: “We…encourage policy makers, educators, and doctors to stop advocating ‘complete the course’ when communicating with the public. Further, they should publicly and actively state that this was not evidence-based and is incorrect.”!

Reporting on the analysis, the Guardian quotes other experts who are in agreement:

Other experts in infectious diseases backed the group. “I have always thought it to be illogical to say that stopping antibiotic treatment early promotes the emergence of drug-resistant organisms,” said Peter Openshaw, president of the British Society for Immunology…

Alison Holmes, a professor of infectious diseases at Imperial College London, said a great British authority, Prof Harold Lambert, had made the same point in a Lancet article entitled “Don’t keep taking the tablets” as early as 1999. “It remains astonishing that apart from some specific infections and conditions, we still do not know more about the optimum duration of courses or indeed doses in many conditions, yet this dogma has been pervasive and persistent.”

The Guardian further quotes another expert in agreement:

Jodi Lindsay, a professor of microbial pathogenesis at St George’s, University of London, said it was sensible advice. “The evidence for ‘completing the course’ is poor, and the length of the course of antibiotics has been estimated based on a fear of under-treating rather than any studies,” she said. “The evidence for shorter courses of antibiotics being equal to longer courses, in terms of cure or outcome, is generally good, although more studies would help and there are a few exceptions when longer courses are better – for example, TB.”

So: “The evidence for completing the course is poor”; “we still do not know more about the optimum duration of courses”; “I have always thought it to be illogical to say that stopping antibiotic treatment early promotes the emergence of drug-resistant organisms”; “they should publicly and actively state that this was not evidence-based and is incorrect.” All of which begs the question: how did this unprofessional, unscientific “dogma” become all “pervasive and persistent”? (It also leaves critics of homeopathy in a very poor position.)

The authors of the BMJ paper do suggest an answer: “Fleming advised, ‘If you use penicillin, use enough!'” Also, as penicillin development progressed, one particular event may have led to the acceptance of the idea that overtreatment was necessary. The authors explain:

When Howard Florey’s team treated Albert Alexander’s staphylococcal sepsis with penicillin in 1941 they eked out all the penicillin they had over four days by repeatedly recovering the drug from his urine. When the drug ran out, the clinical improvement they had noted reversed and he subsequently succumbed to his infection. There was no evidence that this was because of resistance, but the experience may have planted the idea that prolonged therapy was needed to avoid treatment failure.

They further add: “Historically, antibiotic courses were set by precedent, driven by fear of undertreatment, with less concern about overuse… For most indications, studies to identify the minimum effective treatment duration simply have not been performed.”

So, large and prolonged doses of antibiotics, it seems, was grandfathered in and not scientifically established.

Advantages to Stopping Course of Antibiotics

But the forgoing should not be such a shock. In May this year, Dr Le Fanu, writing in the Daily Telegraph, It’s time to rethink our attitude to antibiotics – again, puts it thus:

Antibiotics are a marvel, but, as all know, should be prescribed judiciously, not least because their inappropriate use encourages the emotions of superbugs. Hence also the time-sanctioned advice that one should always complete the full course of pills because, as NHS Choices puts it, “if you stop taking an antibiotic part way through, the bacteria can become resistant”.

That sounds sensible, except it is not, as by definition the longer antibiotics are taken after the symptoms for which it is prescribed have resolved – whether it is tonsillitis, pneumonia or sinusitis – the greater the likelihood that any residual bacteria will become resistant to them.

This has been demonstrated many times, as when examining the outcome in seriously ill patients with pneumonia in intensive care. Compared to those treated for just a week, those given antibiotics for a fortnight were much more likely to develop a recurrence caused by “multi-resistant pathogens”.

The corollary would be that the most effective way of combatting this problem of microbial resistance is to treat infections only as long as is necessary, with the further benefit of avoiding those not-unusual side effects of skin rashes and diarrhoea. And, indeed, over the past few years, numerous studies have confirmed that a single dose of azithromycin is sufficient to cure chlamydia, two days’ worth of antibiotics is as effective as seven for cystitis, and the usual ten days course for cellulitis can safely be reduced to five.

“There is minimal risk and every advantage,” writes Professor of Infectious Diseases at Sydney University Gwendoline Gilbert, “in stopping a course of antibiotics once the signs and symptoms of the infection have resolved”.

In a related article, The merits of abstaining from antibiotics (May 2016), Dr Le Fanu explains:

So it is encouraging to learn, according to a recent study in the British Medical Journal, that without antibiotics cystitis usually resolves spontaneously within a week in two thirds of cases – with the worst of the  symptoms being controlled by a combination of potassium citrate and an anti-inflammatory drug such as Ibuprofen.

… Recently researchers at Chicago University have confirmed the suggestion proposed by microbiologist Rosalind Maskell more than two decades ago that this could be due to colonisation of the urethra by the opportunistic organism lactobacillus that is not detected on routine testing. This, she argues, usually responds to a regime of ‘withdrawing antibacterial treatment, a good fluid intake and complete bladder emptying’.

Again, none of the above should shock. The medical historian Harris Coulter, in his well researched and referenced volume four of his Divided Legacy (1994, p. 600), showed: “In other words, antibiotics in very ‘small’ doses enhance immune-system activity; in somewhat ‘larger’ ones they depress it… Treatment of rats and mice for one day with antibiotics stimulates the primary humoral response, while a seven-day treatment suppresses it.” (Quoted from Hauser and Remington, “Effects of Antibiotics on the Immune Response.” A. J. Med. 72 (May, 1982), 711-716) – Which illustrates the sense of the second of Hahnemann’s three principles of prescribing: using the minimum dose (in size of dose and in not too frequent repetition. See Organon aphorisms 269-283 here or here)

Ps. Surely the inspiration behind Fleming was his first wife – Sarah Marion McElroy from Killala, County Mayo – just like me!