What’s the connection between pox viruses and moles and warts? The connection was first raised by Dr Le Fanu two weeks ago in his weekly column for the Daily Telegraph. In his article When Lethargy Can be Fatal he has a paragraph on moles and the shingles jab wherein he says:

Finally, a reader, aged 71 and thus eligible for the shingles jab, reports that three days after having it (and to her considerable delight), three long-standing and unsightly moles on her skin “literally dropped off”. This could, of course, be mere coincidence, but might it be attributable, she wonders, to the immune response generated by the jab – and, if so, have others had the same experience?

Now, two weeks later he reports in his article The cancer sufferer who found his cure on the internet he says:

The possibility that the immune response generated by the shingles jab might also get rid of unsightly moles would seem to be confirmed by the experience of a reader who woke to find that a couple of prominent warts on her forehead had vanished in a similar fashion.

Further, chickenpox – caused, like shingles, by the varicella virus – can have the same effect: a Brighton reader reports that her daughter was “plagued by warts” until she contracted chickenpox, following which “they vanished”. 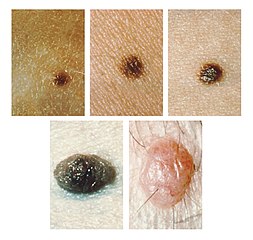 There is only one reason the viruses can remove such growths; because they cause them. This being so, it would be useful to check the manufacturers’ research to find any evidence of the cause or cure of warts and moles by the vaccine or any examples of such from medical literature of the diseases causing and curing moles and warts.

But if there is a causative and curative connection, the question must be asked and answered: what is it that links them? Homeopathy, being well thought-out, particularly by Prof Hahnemann and Dr James Tyler Kent, has already posited an explanation; the sycotic miasm. No connection is explained by allopathy.

The sycotic miasm is characterised by symptoms, most notably, growths (especially condylomatous/cauliflower), excesses/overproduction, ill-effects of vaccination,¹ catarrhal conditions, herpes (including shingles), eruptions in patches, circumscribed eruptions (e.g. herpes circinatus, known as ringworm), vesicular eruptions, and relevant to shingles, nerve pain from suppressed eruptions (which happens when shingles is suppressed – post-herpetic neuralgia), incoordinations and urinary infections. A sensitivity to damp is also part of the picture.

In homeopathy, Hahnemann found a good remedy for the above miasmatic disposition when a clerical student came to him presenting with genital warts. The shrewd doctor, a master at problem-solving investigated and found the student hadn’t gonorrhoea or sexually transmitted warts but had been chewing the leaves of the conifer Thuja occidentalis.

The symptoms found in the pathogenesis of Thuja correspond to that group of symptoms (probably from suppressed gonorrhoea, in the patient or their family history) Hahnemann called sycosis. This shows us the connection between chickenpox, shingles and these excrescences, growths, Dr Le Fanu talks about.

Notes
1. Assuming the “cure” or disappearance of moles and warts is not a bad reaction (suppression such growths is a moot point), it still shows a link between growths and the miasm because of the sensitivity to vaccines/foreign proteins typical of the sycotic miasm.

Further Reading
For a follow-up on the subject see my post Shingles Jab Proves Homeopathy
Miasms in Homeopathy: in search of the fundamental cause; Dr David Little‘s website here

Miasms: For a list of books visit Minerva Homeopathic Books, Emryss or Narayana

Dr Banerjea’s Miasmatic Prescribing: second edition is the most descriptive for clinical use and now includes a cd. The first edition I reviewed here