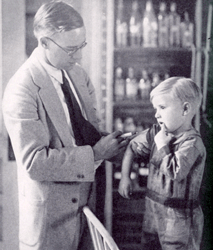 Why should the occurrence of asthma have increased dramatically within the last 25-30 years? What has changed in a short time to bring about a situation whereby 1 in 4 (or 1 in 5 depending on the statistical source) has asthma? What has caused such a phenomenal increase in asthmatic cases in such a short time?

Growing up in the damp climate of the west of Ireland in the ’70s and ’80s we never heard of asthma or an inhaler so I can only conclude our health has disimproved rather than improved despite the fallacious notion that medicine and science are constantly progressing as if they are tower blocks of knowledge upon which we keep building¹.

For example: “The number of people with asthma continues to grow. One in 12 people (about 25 million, or 8% of the U.S. population) had asthma in 2009, compared with 1 in 14 (about 20 million, or 7%) in 2001.”; “From 2001 through 2009 asthma rates rose the most among black children, almost a 50% increase (Centers for Disease Control and Prevention, Vital Signs, May 2011)” (www.aaaai.org); according to the WHO director-general, “Asthma is on the rise everywhere“; WHO estimates that 235 million people are currently asthmatic (link). An interesting statistic for Ireland is: 7.1% of 18+ population have asthma but 18.9% of 13-15-year-olds have asthma, which begs the question: “Why are adults far less likely to have asthma?” Is it because they received fewer vaccines (e.g. until recently the MMR was not administered to children under 15 months, now 13-month-olds are given the MMR).

This huge increase in asthma in this short period of time has, strangely, run concurrent with the mass vaccination programmes which gives credence to my experience. But will anyone investigate the link? I doubt it.

I have treated countless children over the years, most of whom suffer with asthma, but one thing I’ve noticed is that, despite seeing many children who were never vaccinated, I have never seen one asthmatic child who had not been vaccinated. Thus, it’s a fair generalization (there might be exceptions) to conclude that only the vaccinated develop asthma.

As we vaccinate with more and more vaccines and at younger ages we can only expect an increase in asthma, allergies and immune-system disorders. A vet wouldn’t vaccinate our pup as it would “interfere with the mother’s antibodies.” Are humans subject to different biological laws? Hardly. A surgeon in Castlebar told me he wouldn’t vaccinate his baby as “the idea of a vaccine is to induce an immune reaction and a baby doesn’t have an immune system; so how can you induce an immune reaction?”

According to our government website, children now receive 29 vaccines by 18 months of age; expect children’s health to worsen. Here’s a typical scenario. A healthy baby is vaccinated (often at birth with the BCG and often without the knowledge or consent of a parent in one hospital I know). It may be fine for a while until the next shot. Now begins the cycle of recurring ear/nose/throat infections and glandular involvement. The first one or two infections may respond to antibiotics but soon, especially after the third shot, the symptoms stop responding to antibiotics and now the child is on steroids and very soon the doctor is prescribing Ventolin as well. Your child is now assumed to be asthmatic. This is despite the fact that doctors say they don’t treat asthma in children under 3 but the fact they are now treating children for asthma before their first birthday shows medicine is in reverse and our children are sicker now than they were 30 years ago!

Research published in April 2005 in The Journal of Allergy and Clinical Immunology: “The relationship between vaccine refusal and self-report of atopic disease in children,”² a study which looked at the health of the unvaccinated, notes that “in the last 3 decades, there has been an unexplained increase in the prevalence of asthma and hay fever.

Results
The authors say that although further research is needed, from the self-reporting, there was significantly less asthma, hay fever and eczema in the unvaccinated. The journal revealed that a staggering 12% of children go on to become asthmatic after vaccination.

Further relevant research, “The relationship between vaccine refusal and self-report of atopic disease in children”³ was published in the same journal in March 2008. The results and conclusion were as follows:

Results
Among 11, 531 children who received at least 4 doses of DPT, the risk of becoming asthmatic was reduced to ½ in children whose first dose of DPT was delayed by more than 2 months. The likelihood of asthma in children with delays in all 3 doses was 0.39 (95% CI, 0.18-0.86).

Conclusion
We found a negative association between delay in administration of the first dose of whole-cell DPT immunization in childhood and the development of asthma; the association was greater with delays in all of the first 3 doses. The mechanism for this phenomenon requires further research.

In the asthma scenario above, why did some acute (self-limiting) infections give way to a chronic, long-term, illness? If the acutes were cured properly they couldn’t have turned into a chronic condition.

It illustrates the point that our health is worsening. To illustrate further, chronic disease is on the increase. After World War II the incidence of chronic disease was thirty percent.4 A 1960s survey found that fifty percent of the population “had one chronic condition or more.”5 By 1978 eighty percent of all illnesses in the US were chronic.6

Here’s a telling example. I treated a young man since his early childhood who grew up to be an example of good health. He had never been vaccinated. He entered UCD School of Medicine. When he went up in September some years ago, the authorities couldn’t accept this medical rebelliousness of his parents and insisted on giving him all his vaccines. By Christmas, his mother informed me, he was asthmatic.

Further Reading
On forced vaccinations read Opting Out – religious and conscientious-belief objections to vaccination on moral grounds by Barbara Loe-Fisher, which is particularly pertinent when those vaccines are made from aborted fetal tissue (click here).

• HIQA (Dec 2015) says stopping the BCG vaccination programme would avoid “unnecessary side effects.” Link
• The BCG is ineffective anyway says expert link
• Feb. 2016: Is diagnosing asthma a science? In the UK, according to the Daily Telegraph, half a million asthmatics may have been misdiagnosed.
• New book claims “asthma deaths were caused by inhalers”: Deadly Medicines and Organised Crime: How Big Pharma Has Corrupted Healthcare by Peter Gotzsche
• A vaccine for children may be causing some to be asthmatic: Daily Mail
• Vaccinated vs. Unvaccinated: Mawson Homeschooled Study Reveals Who is Sicker The study, on 6-12 year-olds, doesn’t mention those who are asthmatic but does show disturbing findings about vaccines harming children’s health: the study is here