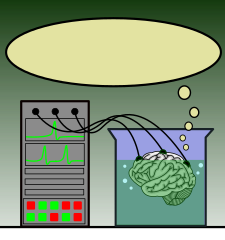 How programmed is scientists’ thinking?

Grimes and his Logical Fallacies

Resorting to libellous generalisations of an ad hominem nature, with rhetorical ploys such as caricature, here’s two possible replies to David Robert Grimes’s (a science policeman) diatribe and The Irish Times which hosted it. But perhaps it wasn’t Grimes himself who wrote it..?

Sir, – in his Opinion (16.4.2014) David Robert Grimes tells us vaccines are great and homeopaths are conspiracy theorists and peddlers! But I’m left with a question: in March 2008 The Irish Times reported five deaths from influenza at St Ita’s in Portrane; in April 2012 you again reported seven deaths from ‘flu at a nursing home in Buncranna, all of whom had been vaccinated against influenza.

I know that the tens of thousands of homeopaths and doctors practising homeopathy worldwide are stupid quacks – I know, I’ve been one for over thirty years – but either David Robert Grimes is wrong or The Irish Times is wrong but it doesn’t follow homeopaths are.

Another possible reply
Sir, – while David Robert Grimes alludes to clean water being as effective as vaccines, (Opinion, 16.4.14), I’m reminded of George Bernard Shaw’s family being interviewed on the Late Late Show in the eighties. They quoted Shaw as saying, “Vaccination is akin to murder.” While it sounded extreme, it made sense when explained: he preferred hygiene to vaccination, against which he campaigned vigorously.

Grimes mentions homeopathy which was also close to Bernard Shaw’s heart: a homeopathic doctor in Harley Street (Raphael Roche) cured his hydrocele “which had blackened ominously” (even today a hydrocele is considered a surgical problem and therefore not amenable to medicine). Shaw was scientific and put the homeopathic doctor to the test. “Mr Roche won the game… the gland became less threatening and the hydrocele suddenly discharged itself… and that was the end of it.”

Shaw’s biographer, Hesketh Pearson, wrote (regarding himself), “… Mr Roche, to whom he sent me when I returned home from Mesopotamia in 1919, and who cured me of dysentery and malaria inside six months.” (The experiences are documented in Bernard Shaw: His Life And Personality by Hesketh Pearson, chapter XXIX)

Perhaps Mr Grimes could take the rational and scientific approach of Shaw and put homeopathy to the test..?

Contradictions
Note the caption with the emotive photo accompanying this article, ‘California and New York are in the midst of their greatest measles outbreak in decades; 2011 saw 26,000 cases of measles in Europe, nine deaths and 7,288 hospitalisations.’ Does he not realise American kids are the most vaccinated and medicated in the world and won’t get into school without all their shots? Last year an endemic of measles went around a private Jewish school in New York. All the kids had been vaccinated. More than likely that is the case now referred to.

And he doesn’t explain why, despite “In north Cork, vaccination figures of a shockingly low 26.5 per cent have been reported,” west Cork had an endemic of measles but not north Cork!

Was Grimes lying in this article: “Measles on the rise as immunisation falls” (The Irish Times, April 16th)” because the same paper on April 22nd had this article: Vaccination for MMR shows ‘marked’ improvement?!!!

With conflicting accounts, we can’t rely on The Irish Times to be impartial.

Whooping cough was at epidemic levels in the UK last year (2013) yet the government acknowledged “we are more than satisfied with vaccine uptake (97%).” – which satisfies the level for herd immunity.

Usually it’s evident diseases were in decline before the vaccines were introduced – probably for the reasons advocated by G.B. Shaw: hygiene as shown by Prof Margaret Stacey, professor of sociology of health, in her book The Sociology of Health and Healing: A Textbook (p.136). Have a look at these disease charts also:

For more on Shaw and Irish writers and homeopathy see my post Sligo, Dublin, Literature & Homeopathy

Obsessive critic of Homeopathy, David Robert Grimes being told to shut up by the radio host, Sean O’Rourke, for his bad manners, on the national airways on Monday. He was discussing homeopathy with a GP/herbalist. Enjoy, I did – click here

Afterword
When someone becomes infected with a disease for which there is a vaccine, the naïve jump on the unthinking bandwagon and assume they had not been vaccinated. They never ask the rational question: were they vaccinated?

Recently a lady in the US died from measles. Again the great and the good assumed she had not been vaccinated; she had. Read a critique of the measles vaccine and this particular case in the prestigious Foreign Policy journal:

A Measles Death, Vaccines, and the Media’s Failure to Inform: There is a discussion to be had about public vaccine policy. The media ought to start having it, by Jeremy R. Hammond (July 5, 2015) Click here for link

Anthony Harnden, a GP and lecturer in primary health care at Oxford University, who led the study, said that 37.2 per cent of children who went to the doctor with a persistent cough were found to have evidence of recent whooping cough infection. More than 85 per cent of these children had been fully immunised.

Vaccination rates for whooping cough have remained consistently high and the outbreak is not due to parents shunning the jab, experts have said.

And this week (July, 2015): “70 diagnosed with Whooping Cough in Reno County”, published in Eyewitness News. We are told, “The district tells us all of the people who’ve contracted it have been vaccinated.”

I’m not convinced about a causal link between vaccines and autism but “Dr. Theresa Deisher believes those made from fetal stem cell lines may pose a serious risk.” click here