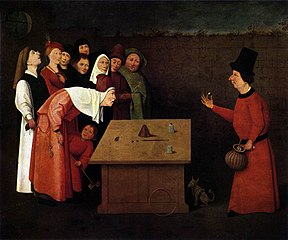 The Conjurer by Hieronymus Bosch

If anyone suggests homeopathy isn’t scientific or properly tested then read this about statins. No, wait; if you are a drug over or too easily dependent upon others to care for your health perhaps you shouldn’t read the following abstracts…

Of course I’m not suggesting any wrong-doing in the world of drug research but who am I to argue with the Daily Telegraph which has been keeping us up-to-date on many topics and has done a great job regarding the statins industry. Here’s a few snippets.

“Drug companies must publish all data – good and bad. Patients have a right to expect independent drug trials free from influence by manufacturers,” says Dr Max Pemberton, writing in the Daily Telegraph today.

Another article explains that nine leading doctors object to the British government recommending statins willy-nilly to over fifties (link):

A group of nine leading doctors noted that eight of the 12 panel members who produced NHS guidelines had ‘direct financial ties’ to firms that manufacture statins.

In a letter to Jeremy Hunt, the prominent clinicians, including the head of the Royal College of Physicians and a former chairman of the Royal College of General Practitioners, say that the majority of the National Institute for Health and Care Excellence (NICE) panel responsible for drawing up the guidelines has “direct financial ties” to firms that manufacture statins.

They say that those with “industry conflicts” should be barred from helping to prepare drug guidelines.

Led by Sir Richard Thompson, the president of the Royal College of Physicians, they accuse Nice of relying on “hidden data” to reach its conclusions, arguing that crucial studies have not been open to scrutiny. Almost all the research was funded by pharmaceutical firms and should be “open to analysis by a third party with appropriate expertise”, they write.

The doctors, who also include Prof Clare Gerada, a former chairman of the Royal College of General Practitioners, and Prof David Haslam, the chairman of the National Obesity Forum, added that they were “seriously concerned” that eight members of the Guideline Development Group had “direct financial ties to the pharmaceutical companies that manufacture statins”.

And in another article we are told an Oxford epidemiologist also objects to the planned statinification of Brits (link).

One of the country’s most eminent public health experts has attacked the NHS rationing body for advising millions of people to take statins based on “wholly inadequate” evidence supplied by a fellow Oxford don.

Prof Kim McPherson said it was “foolhardy” to tell many patients over 50 to take the cholesterol-lowering drugs when the “evidence base” for such advice was insufficient.

The epidemiologist, who has led previous panels issuing NHS guidance, called on Prof Sir Rory Collins, who runs trials at Oxford on which the advice was partly based, to open up his studies to be independently reviewed.

Last week the National Institute for Health and Care Excellence (Nice), which drew up the draft guidance, admitted it was not given access to the full data.

Prof McPherson, 72, has written to Sir Rory to express concerns about possible side effects of the drugs, suggesting they had impaired his own “mobility and agility”.

He added: “I have just stopped taking statins and I am much more agile than I was when I was on them. I want to know why, what is the evidence for it. I am not going back on statins unless I have the evidence.

“You imagine all this creaking an aching is a matter of aging, and it might not be.”

Prof McPherson, 72, has written to Sir Rory to express concerns about possible side effects of the drugs, suggesting they had impaired his own “mobility and agility”.

He has now stopped taking them and said: “I am not going back on statins unless I have the evidence. You imagine all this creaking an aching is a matter of aging, and it might not be.”

The group [of experts who wrote the letter] cited research, independent of the drug industry, showing that statins have been associated with a 48 per cent increase in the risk of diabetes in middle-aged women.

Other potential side effects could include depression, fatigue and erectile dysfunction, they warned.

Prof Mark Baker, director of NICE’s centre for clinical practice, admitted the expert panel which drew up the guidance had partly relied on summaries of data from the Clinical Trial Service Unit at Oxford University, which is run by Sir Rory.

Prof Baker said the full data could not be released to NICE or independent researchers because the trials were “commercially funded” and the information was owned by drugs companies.

The unit receives tens of millions of pounds in funding from such firms, although Sir Rory has insisted its results “bear no relation to our funders.”

“As far as I can tell the trials were not properly done in the sense that there was not systematic, routine periodic double blind assessment of quality of life between treatment of control in all these trials, which you need.

“Also, in so far as there was, none of those data are available for public scrutiny.

Update
(Sept. 2016) Jeffrey M. Drazen is the editor in chief of the New England Journal of Medicine, the distinguished Parker B. Francis professor of medicine at Harvard Medical School, and a senior physician specializing in pulmonary and critical care medicine at Boston’s Brigham and Women’s Hospital, recently admitted in the New York Times:

Health care professionals make hundreds of decisions a day. A small fraction of them are based on evidence from rigorous clinical trials — that is, things we really know to be true. Unfortunately, most medical decisions are based on clinical opinion — an educated guess.

See also links on the Healthy Links page and click on the tags below.