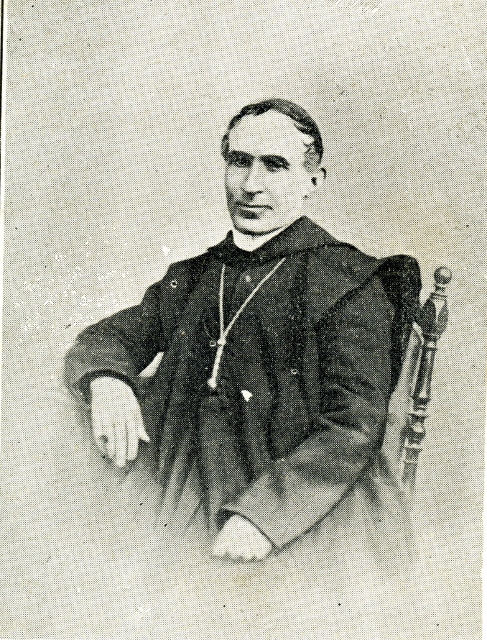 “Welcome to my country, I give you permission to stay,” was my greeting from Bruce, a pastoral worker in Perth, soon after my arrival in 1990.

Bruce had grown up in New Norcia where he attended school at the Mission. He now worked in a Catholic parish. On my visit to New Norcia, I was disappointed that the art gallery had been vandalised but delighted to find the monks who founded New Norcia had brought with them homeopathic remedies from Britain: Nelson’s and Gould’s pharmacies.

In 2004 members of the Australian Homeopathic Association visited New Norcia to celebrate Homeopathy Awareness Week. In an article by Jan Owens, she describes the contribution to Australian homeopathy by the early monks of New Norcia. Her article is now archived in New Norcia (Ref. 1 NNA 02341). Here’s her account.

In 1846 four Benedictine monks led by Dom Rosendo Salvado and Dom Joseph Serra travelled through the Australian bush to set up a mission and found the monastery at New Norcia by the banks of the Moore River. Like the pioneers of their time the monks were men of great determination and vision, enduring extreme hardship as they set about planting crops, building stone huts and making contact with the local aboriginals who settled near the monastery. Dom Salvado’s most cherished ideal was the greater care of the aboriginal population and the monks supplied their food, ministered to their illnesses and injuries and undertook the education of the aboriginal children.

Originating from Spain, Dom Salvado became interested in homoeopathy because of the acclaim Dr Samuel Hahnemann was receiving in Europe with his highly successful treatment of Typhus with homoeopathic doses of Rhus tox, Hyoscyamus and Bryonia during the battle of Leipzig 1813. Dr Hahnemann was the founder of homoeopathy and, to mark Homoeopathic Awareness Week, WA homoeopaths celebrated Hahnemann’s birthday and Dom Salvado’s contribution to homoeopathy in Australia with a day trip to New Norcia on the 3rd April to revisit their heritage.

Dom Salvado brought with him an extensive chest of homoeopathic remedies with which he ministered to the monks, local people and aboriginal community. Salvado was known to have corresponded with Florence Nightingale on the subject of contagious diseases and kept detailed journals, some of which described physical symptoms, bodily functions and the like.

Letters in the New Norcia archives record orders, through a London shipping agent, for homoeopathic books and replacement remedy supplies to be purchased for the monastery from Goulds Pharmacy of London. A letter dated 19th November 1880 confirms that an order for a book of Chemistry, and a chest of homoeopathic medicines, was to sail for Australia on The Daylight leaving about 15th December. (The letter also mentions the very good price they were able to secure for the sale of the last shipment of New Norcia wool and advice from Marseilles on the care of church ornaments as requested.)

The New Norcia Museum has an impressive display of Dom Salvado’s original collection of remedies, books and homoeopathic tools of the trade. There are several small wooden storage chests containing as comprehensive a range of remedies as a modem day homoeopath would stock in their dispensary. For the most part these remedies are 6c and 30c potencies and reflect the use of homoeopathy in Europe and England at the time. These potencies are commonly used in home remedy kits today while higher potencies, 200c, M, 10M, should only be prescribed by experienced homoeopaths. The use of higher potencies was popularised in America by James Kent in the late 1800’s.

Those of you with an understanding of homoeopathy would be fascinated to see such an array of common remedies. The remedies used by Salvado are just the same as the ones we use now and include Aconite for treating colds, croup and fever, Cantharis for cystitis, Arsenicum for gastritis and food poisoning, Arnica for accidents, bruising and shock and Ignatia for grief and homesickness. Homoeopathic medicine is known to retain its potency indefinitely, when stored with care, and the medicines in the museum would be as effective today as those in your home remedy kit. Interspersed with the homoeopathics are many herbal remedies, tinctures and tonics that were probably used by subsequent monks and members of the community. Also on display in the museum is an array of artefacts tracing the history ofthe New Norcia aboriginal mission to the current time as a spiritual, cultural and educational centre. The art collection is one of the finest collections of religious art to be found in Australia.

The monastery library, sections of which are open to the public, houses thousands of books, rare imprints and manuscripts. Among the collection of homoeopathic books, a shifting emphasis from the philosophical texts (Hahnemann 1845) to the more practical (Ruddock 1879) is observed. Initially Salvado would have required the academic texts for their philosophical background. As he used his remedies in the treatment of the local aboriginals, and community, his references would probably have been applied more to the practical, therapeutic texts – this is reflected by the publication dates of his book collection.

Many of these texts are still in use by homoeopaths today, with the addition of new works. This is not because the content or remedy pictures have changed, but rather that we prefer modern language and find it easier to relate to our cases. No homoeopath would be without Samuel Hahnernann’s definitive text the Organon and, in recent years, Salvado’s copy was found in his room at the monastery.

Dom Salvado possessed in abundance the great qualities of the Benedictine monk. His outstanding physical and intellectual powers, combined with his single-mindedness of purpose and absolute obedience in giving up his will to the cause, have resulted in the New Norcia we see today. His character and personality were reflected in the depth of the grief experienced by the local aboriginals when they heard of his death in 1900. (Ref. 1 NNA 02341)

New Norcia – Pre-history
Next to the famous Cathedral of Santiago de Compostela in Galicia was the Benedictine monastery of San Martín Pinario. There, two young men had made their monastic profession, promising to live a fully monastic and obedient life.  Following closure of the monasteries by the anti-clerical government in Spain in 1835 one of these men, Dom José Benito Serra, went to the renowned Abbey of the Most Holy Trinity of Cava, near Salerno in Italy. After a few years of waiting in vain for his own monastery to re-open, Dom Rosendo Salvado followed Serra to Cava.

In 1844, and fired by missionary zeal, the two monks applied to the authorities in Rome to be missionaries and were assigned to the newly appointed first Bishop of Perth, Rt Rev John Brady.  Brady led a large missionary party to Australia, reaching Perth in January 1846.  Brady divided the WA Mission into three districts and it was to the Central District that the two Spanish Benedictines, a French Benedictine novice, Dom Leander Fonteinne and an Irish catechist, John Gorman departed.

The group set out in February 1846, travelling by way of Toodyay and Bolgart. From there, accompanied now by two Aborigines and two servants of Irish settler John Scully of Bolgart, they proceeded north-west and made camp in this district.  The initial months were difficult. Gorman was accidentally shot dead (by Fonteinne) in June that year, and Fonteinne, distraught following the accident, abandoned the mission and returned to France. So it was the two Spaniards who were responsible for the foundation of the mission that grew into the New Norcia of today.  Although, as its inaugural superior, Serra had responsibility for the mission, his appointment in 1849 as Co-adjutor Bishop of Perth diverted his missionary energy. After ten very active, but fairly troubled years, he left for Europe in 1859, never to return. So the first period of New Norcia’s history is usually known as the Salvado Era

The Salvado Era: 1846 – 1900
The first fifty years of New Norcia’s history are dominated by the towering figure of Bishop Rosendo Salvado (1814-1900). Salvado spent 54 years of his life making New Norcia one of the most progressive and successful missions in Australian history. Salvado’s original vision was to create, among the indigenous peoples of the Victoria Plains, a Christian, largely self-sufficient village based on agriculture.

However, after the decimation of the local populations by introduced diseases in the 1860’s, he concentrated his activity on giving a practical education to the indigenous children who were brought to New Norcia from all over the state.  Like other missionaries of the nineteenth century, his aim was to ‘civilise and evangelise’ according to the European ideals of the time, but he did so with sympathy for indigenous culture that was rare in his day.

Salvado led a monastic community which, at its height, numbered seventy men, most of whom were Spaniards and lay brothers. His several fundraising trips to Europe provided him with the means to acquire land, to construct buildings and to purchase books, vestments, art works and ritual objects as well as stock and equipment.  Practical success and his own personal charm combined to make Salvado both a notable Western Australian and an international figure in the Benedictine world.

Sadly, in 1900 during a trip to Rome, Salvado became ill and died at the age of eighty-six at the Monastery of St Paul Outside the Walls. His body was brought back to New Norcia by the Community and interred in the Abbey Church where it rests today.  It is a reported that when news of Salvado’s death reached New Norcia the local Aboriginal people cried and wailed for three days.

Today
Today New Norcia has 16 Benedictine monks in residence and run many businesses to cater for the many visitors. There’s a museum, art gallery, Roadhouse and general store, the New Norcia Hotel, a retreat centre and the old colleges and convent provide accommodation for groups. New Norcia is also a rich source of information for academics with its professional archives. The monastery also produces its own wine, beer, port and olive oil. Who says you can’t make something out of nothing!

Further Reading
Here is an interesting reply from Francis Treuherz, with some further information,

“Hi Steve
I do admire your work.
In relation to your Catholics 2, not sure if you read this, maybe we read the same sources but I was there, you are welcome to link to this: Homeopathy helpline resources … Scroll down to the History section and on the right there it is – among others. Or you can open the article here Bishop Rosendo Salvado and the Origins of Homeopathy in Australia

Also on the history of  homeopathy in Australia: click here
greetings
Fran”