Sligo and Dublin Writers and Homeopathy

James Joyce
Joyce wrote humorously of homeopathy and some homeopathic remedies in Ulysses which you can read here. But a number of Irish writers have used homeopathy, written about it or mixed with prominent practitioners and advocates of homeopathy.

George Bernard Shaw
One such person I’ve written about before is George Bernard Shaw, the playwright (see here). Shaw’s hydrocoele was cured with homeopathy and his biographer Hesketh Pearson had his cholera and dysentery cured “inside six months” by Shaw’s homeopathic doctor, Mr Roche of Harley Street, London. (All three cures are documented in Pearson’s biography of Shaw; George Bernard Shaw: His Life and Personality, summarized in my post above)

Lady Gregory, friend of Yeats, was a neighbour of the homeopath Dr Frederick Hervey Foster Quin at Queen Anne’s Mansions.

Oscar and Constance Lloyd Wilde
Yeats was a friend of Oscar Wilde who wrote about homeopathy and Wilde’s lover Alfred Bruce Douglas was a patient of the homeopath John Moorhead Byres Moir. Wilde himself had read Homeopathy in Venereal Diseases written by the homeopath Dr Stephen Yeldham. Wilde was concerned about the “monstrous doses” of allopathic drugs.

Wilde’s wife, Constance, was a friend of Lady Georgiana Tollemache Temple who suggested she attend a lay homeopath and clairvoyant known as Elizabeth Wagstaff, which she did. Wilde, in his play Lord Arthur Saville’s Crime, wrote about homeopathy and showed a good knowledge of how the homeopathic remedy can work. As quoted by historian Sue Young (link):

Good heavens! Lady Clem,’ cried Lord Arthur, catching hold of her hand, ‘you mustn’t do anything of the kind. It is a homeopathic medicine, and if you take it without having heartburn, it might do you no end of harm. Wait till you have an attack, and take it then. You will be astonished at the result.

Constance Lloyd Wilde was, like many of the literati, a member of the Golden Dawn, a magical order for spiritual development. Here she would have interacted with many homeopaths like E.W. Berridge and Charles Lloyd Tuckey as well as literary greats like Yeats, Bram Stoker, Edward B. Lytton among many others.

The irony of Oscar Wilde’s death is that he died from meningitis caused by an ear infection. The irony being that his father, an ear surgeon, had devised the eponymous retroauricular incision which initiated the modern era of mastoidectomy (link). Who knows, it might have saved Oscar’s life!

Sir William was a friend of Arthur Grattan Guinness, son of the brewer, a Dublin physician who converted to homeopathy. 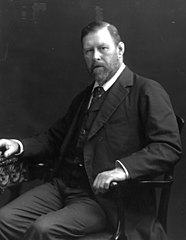 Bram Stoker (1847-1912)
A sickly child, it is likely he knew the famous Arthur Guinness, physician to the Raheny and Clontarf Dispensary in Dublin.

Bram Stoker’s mother’s family had moved to Sligo but returned to Ballyshannon in 1832 to avoid the cholera pandemic which according to one source killed five eighths of the Sligo population. Again quoting Sue Young:

All along the way large crowds angrily tried to repel travellers from Sligo but the Thornleys managed to smuggle into their cousins’ house on the Mall. After a medical examination, they were allowed to stay but were kept in quarantine for a while.

After the pandemic, in 1839 homeopathy became popular after Charles W. Luther introduced it to Ireland.

Another Sligo connection is the Temples and Viscount Palmerston of Mount Temple, Sligo. Their stories are documented in detail by Sue Young here.

Conclusion
All the above people and their friends who used homeopathy or at least were open to it were smart talented people. Smart people choose smart medicine!